Why I Don’t Teach Cursive

Massachusetts is one of several states that wants to keep penmanship as part of the curriculum. A few hours ago a Facebook friend asked if others thought cursive should be kept alive.

My answer: No — unless you have nothing more important to do. 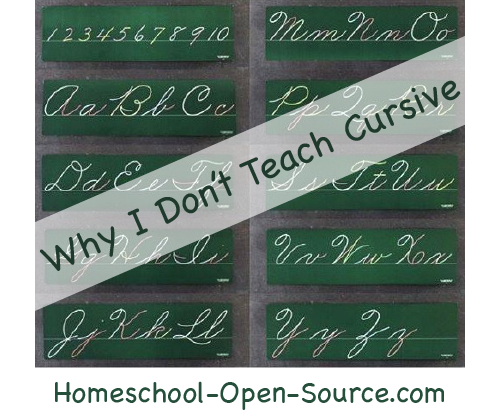 In my experience, cursive is one of those sacred cows that people hold onto because the affinity for the past overrides actual cost/benefit analysis of possible educational options.

Resources — particularly time — are limited. I have shelves of truly amazing, awesome things I’ve always wanted to do with my kids, but haven’t had the time to complete. Items, I fear will end up being passed on to some lucky family, completely unused, when Caleb graduates from our homeschool in eight short years. Things like intermediate logic courses, spherical geometry, or intense geography.

I just don’t care about cursive. Particularly nonsensical D’Nealian! Why should capital Zs look like Ys with a loop? Why should Gs and Zs and Ss look like nothing at all? Who got to decide that nonsense?

More to the point, why should I keep up the nonsense just because I had to learn it?

I have to think that all the things we learn — and a long list of things we can’t add to our already full schedules — are more profoundly impactful than learning to make a capital Q look like a swirly number two.

For our entire homeschooling journey, we have used Portland State University’s Italic Handwriting series. It is an elegant system that moves efficiently from a streamlined print to a joined print that’s still legible and uses the same alphabet.

The arguments (all real!) I hear in favor of continued cursive torture are as follows:

So many historical docs are written in cursive.

There are no relevant historical documents that haven’t been “translated” into digital format.

Addendum: Please note that learning to read cursive takes about 15 minutes. Learning to write in cursive, much longer.

There are plenty of things to teach eye/hand coordination that are actually useful in themselves. Consider:

All are more interesting than hours of writing swirls on paper and they produce something awesome as well.

Most of all, with limited resources (time!), cursive isn’t remotely the best use of my kids’ time. I’d rather they learn to play piano or program or build something or about a billion more useful things!

So will forcing your children to spend hours in in plank position. (And they’ll have rock hard abs, to boot.)

Preparing a proper business letter is a lost art.

I have three kids in college — one in grad school and two undergrads (all at BYU). There has been exactly ONE thing they’ve had difficult doing because of this “deficiency.” They have a hard time reading the birthday cards from their grandpa.

Rather than require my children to spend hundreds of hours in penmanship courses in elementary school, I chose to spend 15 seconds per year reading the cards with them and 15 minutes teaching them to read cursive when they felt like it. And let them spend those hundreds of hours doing things like singing, programming, writing, etc.

Schools should get back to basics.

In a sense I agree with this. Schools spend so much time teaching conflict resolution, dental hygiene (for eight or nine years straight), sensitivity training, diversity education, etc., that they scrimp on the most basic things of real educational value. But how cursive handwriting gets put on the list of essentials is beyond me.

Sure, if you plan to have a career addressing wedding invitations in fine calligraphy, then this might be on top of the list. Otherwise…

Children with good cursive will have “higher quality” signatures.

One of the main arguments I (and probably you) hear against homeschooling is, “Aren’t you worried about socialization?”

My answer has always been the same, “What do you mean by socialization? And how does public school optimally provide it?”

It’s not about hating public school, per se, nor about pretending schools don’t provide various socializing opportunities. It’s about whether public school is the best way to socialize kids. And pretty much across the board, it’s not.

In the same way, it’s not about hating cursive. And it’s not about ignoring the positive elements learning cursive holds. It’s about looking at the various options available and determining whether the time needed to learn cursive handwriting is the best use of our homeschool time. In our family, there are too many more valuable things to do to make it a wise choice.

Here are more real life additions to the reasons to impose cursive torture on children.

Both print and cursive are “very necessary.”

More necessary than all the alternatives?

They need to recognize cursive.

And your kids have to spend hours and hours on penmanship to “recognize cursive” when they see it?

I want my children to be able to read cursive so they can do family history work and read the documents our founding fathers wrote.

Being able to read cursive and write in cursive are not the same skill. In addition, recognize the myriad different cursive styles and systems that have been used historically. I bet you neither you nor your children learned all the variations just so you could read each of them. Right?

It helped two of my children overcome difficulties recognizing b, , p and q.

I refuse to raise adults who write a check and it looks like a kindergartener wrote it.

Writing legibly doesn’t require writing in D’Nealian (or any other) cursive. But if making sure you child signs his checks like John Hancock is the priority for you, so be it.

P.S. I still use paper check on a occasion, but not one of my adult kids has ever so much as purchased them.

My 10 year old has excellent penmanship and I’m very proud. He’ll be one of the only adults in his generation who will and that gives him a great advantage in the work place no matter how prevalent computers become.

As I said in the post, it’s a matter of opportunity cost.

Your middle school and high school students go to take the SAT AND ACT and cannot write in cursive the REQUIRED statement of honesty as REQUIRED by the testing service. The test proctor has to take time to teach more than 75% of the students how to write the statement in cursive. Same issue for the MCAT, LSAT, GRE, etc.

I’ve had four kids take the ACT, two take the SAT, one take the LSAT, and one the GRE. None of them learned cursive. None of them had special proctor tutoring.

I just asked one of my daughters if she ever required cursive tutoring in a test and she scoffed loudly.

She’s still going to learn intensive geography, etc. Cursive/handwriting is not such an intense “subject” that it takes much time or discipline as some may think.

There’s a reason that progressives (of either party) so oppose a fair or flat tax. Having all the tax we pay gathered up in one lump sum makes it hurt they payer more. And the payer is more likely to rebel if they recognize the true burden of their taxes. Instead, we are taxed a few pennies here, a dollar their, a fraction of a cent every second Tuesday. And when the government comes to us and says, “We need more money for EDUCATION and it’s ONLY $2 a person!” we all pony up and vote for it because, after all, it’s for the CHILDREN.

Similarly, educators (homeschoolers included) have this way of pretending that 10 minutes a day just doesn’t really matter. It’s meaningless. It’s a trifle. It doesn’t take much time and couldn’t possibly get int he way of learning anything else.

But the truth is in the math. Everything we choose to do has as cost. Including that 30 hours per year.

If that’s the best way you can use 30 hours, do it. If your child will gain the most from spending those 30 hours learning D’Nealian, have at it. I can’t make that determination for you. I’m just asking that you make sure it really is the best use of those 30 hours and not just a knee-jerk, default choice based on what you’ve seen, what you’ve heard, or what you’re used to. Or because you’ve never considered the other possibilities.

It’s not hard, it takes her less than 10 minutes to do, and it won’t hurt her.

One of the first huge changes that occurred when I began homeschooling 19 years ago was when I decided that my kids would do nothing unless I had thoughtfully done a cost/benefit analysis of the topic. That was a huge change from accepting out of hand most everything schools required, offered, promoted.

In a nutshell, none of the three things mentioned above would motivate me to require something of my kids.

Again, I’m not saying you shouldn’t teach your kids cursive. I’m saying I wouldn’t chose to do it based on those factors.

Learning to write in cursive is part of life and being a grown up, educated person.

Honestly, I have no respond for this other than to say making definitive declarative statements about the necessity of particular bits of knowledge without any backup doesn’t impress me much.

I’d rather have my kids spend 20 more minutes reading classics, playing the piano, programing a computer, cooking, dancing, or rubbing my feet with lavender-scented lotion every day than spend it making pretty doodles. Because I see more benefit to those ways of spending the 20 minutes (particularly that foot rubbing thing) than doing cursive.

As I said, if penmanship is the best use of your child’s time, go for it. It’s just not mine.

I really thought I addressed this sufficiently above, but I will humor my dear decades-long friend who said this and respond in more detail. You’re welcome, Mary.

I was taught D’Nelian in school. My signature is not in D’Nelian. It is in my own junior high movie star autograph style. My husband’s signature, likewise, is not in the D’Nelian he was taught. His is, in fact, utterly illegible. All of my non-cursive writing children have signatures fancier and prettier than mine. Even my 10-year-old just signed a contract at a bank last week.

Note 1: there is no specific requirement for signatures; the signatory chooses what her/his signature is.

Note 2: writing a fancy signature — if indeed this is one of the essential adult skills — doesn’t take nearly the time, effort, resources that are expended to learn to have über purty handwriting.

Note 3: most of my signatures the last five years have been digital, even big deal signatures.

Next post: Dixie Allen, Common Core, and Why We Homeschool

Previous post: State Tests – from the eyes of one that has seen