But I Want to Go to School! – How to Respond When Your Child Doesn’t Want to Homeschool

Question: Should I let my child go to a public school?

We’ve decided to homeschool this year, but my daughter is hearing all about school from her friends. Now she wants to go. What are my options or, better yet, is there a way to change her mind? 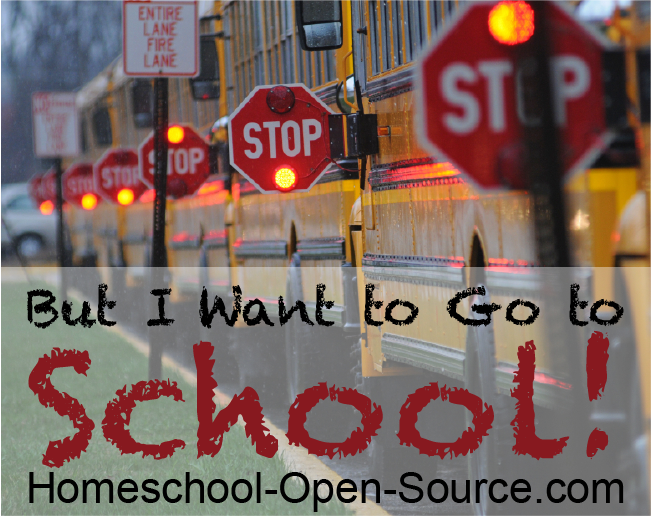 Grace Llewellyn, a homeschooling author, was attributed with saying the following,

If they go in, it will be with the freedom and the knowledge that it is their choice, and that they can just get up and leave if they want to. The knowledge that you have that freedom brings a whole different attitude to learning and to the entire school experience.

My children have always been allowed to choose public school. My three oldest (one now in graduate school, two college undergrads) took a few classes most years beginning in 9th grade. My fourth went to half-day kindergarten for half a year and now (at 16) takes musical theater classes at a performing arts charter school. Neither of my boys (13 and 10) has ever attended a public school. Yet.

In my experience, Llewellyn’s statement bears out. Kids who choose to go to school — and know they can choose otherwise — have an entirely different experience than those who are forced to do so. Knowing they can opt out if it doesn’t meet their needs — or they found out it’s not quite as cool as it sounded — changes the view entirely.

If you prefer homeschooling, here are some ways to get your child to prefer it as well:

Provide What Your Child Wants

My oldest daughter, Jessica, attended a public school for two years before she convinced me to keep her home. She felt the schoolwork was boring and limiting, and said so often. But she did like playing at the playground, meeting other kids, and lots of positive attention and feedback from teachers and administrators. Because of that we  included park trips, support group activities, and neighborhood children into our days.

Make Sure Your Child Understand Reality

While attending a public kindergarten, the same daughter envied the kids who were in the after-school program! A crushing blow to a devoted stay-at-home mom.

One day I went to her school right at dismissal time for a committee meeting. She longingly watched all all the kids in after-school care running merrily out to the swings. But when the meeting ended, less than an hour later, we walked past the playground again on the way to our car. There, lined up along the chain-link fence, were four of Jessica’s classmates. They were hanging onto the top of the fence and looking longingly out toward the parking lot. As we passed, and Jessica greeted her friends, they said to her, “How come you get to go home and we don’t?” and “You’re so lucky!”

Here were her friends, who still had another couple of hours before they would see their parents, expressing their envy of her! She had just never been around long enough to see this transformation. The grass in the playground looked greener to her, until she got a little glimpse of what it was really like to be stuck in there. Many times since, she has thanked me for being home for her.

Experience Is a Great Teacher

On this subject, countless homeschool parents have said, “If they want to go to school, let them do it! They’ll find out soon enough what it’s really like!”

When Monica said she wanted to go to kindergarten with her neighborhood friends, I signed her up. By Christmas she decided she’d really rather be home. She didn’t hate school, but she didn’t prefer it. And if she had preferred it and thrived there, that would have been fine as well. As one mother said:

She learned much better by experiencing it than she ever could have through my explanations. If the child has the choice to stay home, he or she will have something very few school children have — freedom of choice — and I think that can make all the difference in the world.

My second daughter, Belinda, told me she wanted to go to school when she was about seven years old. We sat down to find out why. After much consideration and thought (at first she wasn’t sure), she concluded there were two gaping holes in her educational life:

Within the week, we arranged to both ride a bus and eat in a cafeteria. It took exactly one experience with each to realize those secondary activities weren’t all that exciting after all. She was satisfied and decided she’d rather be home for the time being.

The Joy of Learning

My biggest concern about institutions is the attitude they seem invariably to produce. I can’t recall at what age it begins, but I don’t know of any 6th grader who isn’t at least beginning to think school is a drag by March. By that time they can’t wait to get out of “prison” for the summer.

Fortunately, when our daughter left school, she still had a desire for knowledge. She was still very curious. We never had to couch learning as a game (although we do play lots of games) because she loves learning.

Jessica came home because she convinced us that homeschooling wasn’t lunacy. But the advantages now seem so numerous. All of our children have have the opportunity to learn the things that truly fascinate them. What a blessing!

What would you do if your child wanted to go to school? What options do you see?