[This article was originally published in about 1994 in Home Education Magazine. In 2005 it was updated and posted on Mormon Momma. I’m moving it here because I am asked about my math philosophy — and in particular why I hate Saxon math — in a homeschooling context so often.] 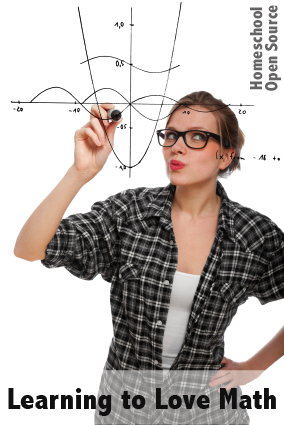 When I was nearly four years old, my father received his PhD in mathematics from the University of California, Santa Barbara, and since that time he has been a professor of mathematics at Brigham Young University. On June 30th, 1995, he retired, was granted emeritus status for the maximum three years, and then continued to teach — without remuneration — until 2005.

In October of 2005, he was given the Honorary Alumni Award at BYU’s homecoming festivities in honor of his contribution to the university. He may have retired his position, but not his love of numbers and formulae and sharing it with students.

All my life I enjoyed math and performed well in my classes; I guess it’s in my blood. Most of my girlfriends hated it or, at least, thought I was nuts to more than tolerate the subject. For years I alternated between feeling weird and feeling smart. (If you care to categorize me, I now prefer the latter!)

Just months after my eldest child, Jessica, was born I happened upon an article in Parents magazine titled “Math Stinks!” by Mary Rubin Stuart. It explained this dichotomy and it began a whole new way of thinking about raising my daughter (which has subsequently become raising four daughters and two sons).

Although young girls generally score better on math tests than do boys, as they get closer to adolescence they tend to fall farther and farther behind. This discomfort, disinterest, or just plain difficulty (technically called “math anxiety,” and also seen in boys) is often reinforced by parents (especially mothers) making comments to their children (especially daughters) such as, “Well, I never liked math either,” or “I never was any good at math,” or “Well, we Smiths just don’t seem to have mathematical minds.”

Statements like these imply that it’s perfectly normal and acceptable for a child not to excel in math. They also seem to hint toward feelings of, “Well, I’m no good at math and I’ve done just fine without it. You will too.”

Never have I met a parent who would say to a child, “Well, I never liked reading either,” or “I was never any good at thinking myself,” or even, “Well, we Smiths just don’t seem to have historical minds.” Why is it acceptable to promote math illiteracy to our kids when we would never promote other illiteracy?

In the early 1990’s, my sister, Nora Hess, received her master’s degree in math education with a thesis titled Elementary School Teachers, Scientists, and the Two Cultures of Mathematics. It clearly supported what much other research has shown: that elementary school teachers — who introduce most children to math — are often those least equipped to teach the subject. They are people who have never enjoyed math and don’t understand it. Many tend to see math as a magical set of rules to be memorized and regurgitated, rather than a set of tools for problem solving.

My husband, who has PhD in electrical engineering, and I have often discussed encouraging our children (especially our daughters) in math and science. We have seen this as a way to leave as many future options open as possible. We have noticed how many educational and career opportunities are unavailable to those who cannot or will not take advanced mathematical courses. It appears that many of the “traditional female” fields are simply the subset that do not require advanced math.

My theory about math avoidance was backed up handily when I discovered an article by Lucy Sells titled “Mathematics A Critical Filter.” Ms. Sells’ research showed some amazing facts.

In an interview of freshmen entering UC Berkeley, 57% of males had taken four yours of high school math, but a mere 8% of females had taken as much. Without those four years of math, 43% of the males and a whopping 92% of the females could not qualify for many entry-level courses. This disqualified them from ten out of the twelve colleges at the university, and 22 out of 44 majors. Half of their potential career choices were eliminated by their past math avoidance!

Math is, in fact, the “critical filter” allowing some to pass and holding others back.

If you, as a parent, have an aversion to math, don’t let it rub off on your children. Do something about it.

There are methods of teaching mathematics that encourage a love and interest in math, and those which tend to kill the joy. If I could give you one piece of advice, it would be this:

What can you do to bring out a love of math in your kids?

All these things are appropriate for elementary school and above. Don’t believe that the great math is only for those at an advanced level. If it were, few of us would retain interest long enough to find out about it.

If you jump into math with enthusiasm, your children can come out winners. Thanks for the head start, Dad!

Next post: HomeLifeAcademy.com – Why I Prefer It as Our “Umbrella” School for High School

Previous post: Things I wish I would have known