How to Start a Homeschool Game Club 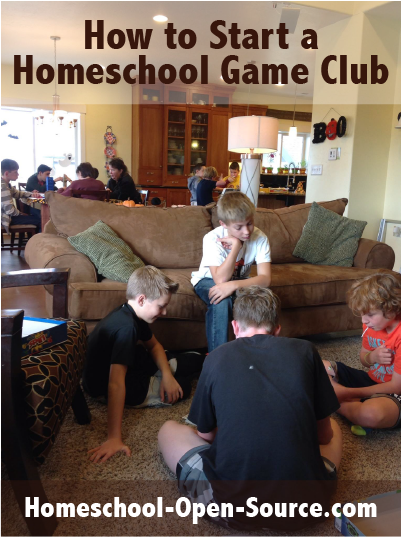 If you’re anything like me, public school socialization was one of the worst parts of growing up “in the system.” With little oversight and children highly motivated to be “king of the hill,” the stereotypical school bullying is is so common it’s legendary.

One of the best parts of homescchooling is customizing not only curriculum but also socialization to suit your children.

Rather than forcing them — seven hours per day, 180 days per year — to deal with the built-in socialization that happens in public schools, you can plan the socialization for maximum benefit.

Assess your child’s strengths and weaknesses, likes and dislikes, and build to suit. And if you’re not up to an enormous project, it’s all good. Fun homeschooling social opportunities can be simple.

As our kids have gotten older, our homeschool has morphed, too. With three kids in college, we have half as many homeschooling bodies as we used to. This is how it looks today:

Last year they were involved in a selection of classes one day per week; this year we decided to change it up. One thing we decided to add for fun and friendship was a boys’ game club. Setting it up was simple.

First, I made the group compatible with both of my boys, for maximum family benefit. Making the age spread from 10 to 14 meant we’d have a good cross-section of kids, but they’d be close enough in age to play together.

Second, I created a basic schedule that allowed enough time for formal plan, free play, and clean up, without making it so long the kids start getting crazy.

Third, when creating a group, I suggest to set the ground rules from day one. This will help keep things running smoothly from the start and prevent hurt feelings. (If you make a rule that no siblings can come after some siblings have already come, the participants are much more likely to take the rule personally than if it was a rule all along.)

Fourth, we came up with some “get to know you” games to use at the beginning of the first few meetings. This gave the kids an excuse to interact and start breaking the ice before they settled in. We bring these back up on occasion if we get enough new participants to warrant it.

Fifth, during game time, I try to mix the boys up so they aren’t always with the same kids. We switch around games and groups a few times during each event.

Sixth, while I like this time to be very kid-centric, I hang out and monitor what’s going on. To be honest, in all my years hosting homeschool events (sometimes 70+ kids strong), I almost never have trouble with bullying or other problematic behavior. The kids are generally kind, fun, and polite. But it helps to have a decent parent/child ratio in maintaining civility. (This past week, we had 11 boys and two moms present. 0% problems.)

After holding the club for just a few weeks, it almost runs itself. Each Friday morning we pull out a selection of games (trying to bring some variety each week). We also invite attendees to bring any games they like.

As the kids arrive, I hold up a game and say something like, “Scattergories can have four players. Who wants to play this?” Then I take the three or four who volunteer and send them to a spot on the kitchen island. Then I’ll say, “Two for battleship?” and the first two to volunteer grab it and head for the table.

Basically, I sit in a chair in the room and read. As games start to wind down, I get the players to pick up their game and then reconfigure the players and games based on who is available and what they’d like to do.

With about 20–30 minutes to go, we pick up all the games (unless there are some who want to finish what they are doing) and all who care to go outside to jump on the tramp and run around or go downstairs to play foosball.

Seriously, it’s an easy thing to do and they boys have a ball. They are making good friends in a safe and friendly environment, which was the entire point.

What homeschool activities or groups have you hosted? If you have one to share, please comment below or — if you’re willing to give details — please write a post to help others contribute to the community!

Next post: You Can Homeschool – You Just Don’t Want To