Dixie Allen, Common Core, and Why We Homeschool 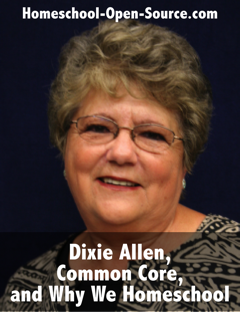 Utah proudly claims to be the reddest state in the union — meaning that we like to think we are more conservative than anyone on earth. But we’re not. We’re not much different, collectively, than the nearest progressive, voting in favor of more and more stuff that we want other people to pay for and grabbing greedily for our piece of the pie.

Education is no exception. In fact, it’s probably the best example in my state of throwing it all to government control. When the schools (and unions!) cry for more money, Utahns fall all over themselves to get it for them.

More than bewildered by Utah’s repeated willingness to give up freedoms for messes of federal pottage, I decided to go straight to the horse’s mouth. On August 31, 2013, I had an enlightening — entirely because of its lack of content and transparency — email discussion with Dixie Allen, Utah’s District #12 school board representative. Mine.

I am in District 12 and want to know your position and voting record on Common Core.

First let me share with you that I have a unique perspective on Standards because of the years I have spent as a teacher and administrator in public schools.  I have used standards as a teacher, administrator, parent and grandparent.  Thus I see standards as the road map to help students direct their learning toward ultimate learning.

With that in mind I voted to upgrade our standards, as I have done many times in the past to insure our students can compete with students across our nation for college and career opportunities. The Common Core Standards are an improvement of our standards in Mathematics and English/Language Arts.

I am going to send you a copy of some news articles that supports this view.

Thank you for responding, Dixie.

Rather than qualifications, I’m looking for clear answers. Bottom line is you voted to implement Common Core. Is that correct? Your “unique perspective” isn’t terribly important to me. That you serve the students of Utah is.

I wonder if you would please elucidate for me how the actual mathematics standards (as this is my primary concern, though there are others) are beneficial to students. I do know what the standards involve, so I’m not asking for an explanation of those standards. I’m also not asking for articles that show a correlation between these standards and improvements, because we both know they don’t exist at this point.

I’m asking why you as a board member believe the accepted math standards will actually improve how students understand and perform in mathematics and what criteria you have used to make that decision.

Sorry thought I had made myself clear.

I believe the new math standards are much better than our previous standards. Mainly because we teach all the standards to all students.  As a result we will no longer have students arrive at ninth or tenth grade without the skills to take a math class.

We have already seen the improvement in student learning as measured by the ACT assessment.

Hope that helps answer your questions — but let me know if there are other questions.

Let me try to be more clear.

First, did you vote to implement Core Curriculum? Yes or no would suffice here.

Second, I understand that you think the new standards are better. So far, you have told me that you like them because “we teach all the standards to all students.” This isn’t a criteria that has any academic merit, as I’m sure you can see. I could, for example, say that I’m teaching teenagers to slit their wrists and that it’s better because “we teach it to all the students.” Obviously that doesn’t make it an improvement.

You also say that you have seen the improvement in ACT assessment. Could you be specific about what curriculum was used for which students, how long this was implemented, and how the assessments correlated to those changes?

Third, my question is: what is it about the CC math standards that you think is good? What is it in the standards that is an improvement? What specific implementations are actually benefitting students (and why do you believe this)?

What is it specifically about the MATH standards that will improve math education for Utah students?

Here are some possible things to address:

Although I would first like to address math, yes, I understand that there is stress on reading “informational texts” in CC. Interestingly, my anecdotal experience is that those who can master classics can also read a brochure or manual with accuracy. Do you have evidence to the contrary? Do you know people who can dissect complex literature who cannot, for example, read the driver’s ed manual?

Thank you for your response. Could you also respond to the second and third items when you have time? (Also the bonus question about “informational texts”?)

It is obvious that I am not going to give you the answers you want or need — but here is an attempt — but it is the best I have:

Second:  Standards are statements of what a student should know and be able to do. Our assessments that will be truly aligned to the new standards will not be given until Spring 2014 — but we are seeing improved assessment grades on the ACT (the college application test) already, because they have been evaluating to the higher standards for a long time — as that is the measurement they believe must be attained to be a successful college student.

Curriculum is not the decision of the State Board, but of the district, schools and teachers in consultation with each other.  The Standards will make reference to material that is to serve as examples, but the local district, school and teachers decide on the curriculum that they believe will best teach the Standards.  Remembering that Standards of what students should know and be able to demonstrate they know — are not tied to any textbook, curriculum or literature.

Third:  I believe the standards are better, because we begin teaching intro to different higher level math and language arts standards early in elementary.  For instance we begin to substitute letters for numbers and help students learn how to solve for the unknown early in elementary.  It is a simple standard when taught correctly and makes the accelerated movement of students in Middle School and Jr. High into Pre-Algebra and Algebra a thing of the past.  All student learn the standards and the schools are offering (when appropriate an accelerated version for those students who need more of a challenge).  Over the past three years since the adoption of the Core Standards, the state office has worked hard with teachers across the state to help them move into these new standards and help them find curriculum and assessment to help them as we come to be completely compliant on the standards.  The Teachers have been wonderful in their response and hard work.

I think I have answered the question on Math — integration at an early age and working on Algebra and Geometry skills from early elementary through early high school.

I have not reviewed or approved of any curriculum.  As stated there are some recommendations in the Standards for examples, but districts, schools and teachers are free to use what they feel is the curriculum that works best.  We do not recommend curriculum.

The math experience I have had is teaching second grade for 6 years, being the principal of elementary for 6 years, a fifth grade school principal for 6 years and a high school principal for 4 years.  However, I have taught my two Junior High grandchildren for the past 3 years using an on-line curriculum that aligned to the core.  I found it very beneficial — although I am not an expert in the field of Algebra or Geometry — but my grandchildren learned a great deal and got outstanding grades.

The only evidence that I have in regard to reading of informational texts comes from the colleges, professors and companies that accept or hire our students.  They resoundingly have suggested that students need to better understand how to read informational texts to preform at a college and work level.  (None the less, I hope our students will also read the Classics — but there does not seem to be the need to completely understand classical literature to get into college or get a quality job.)

I am sure I  haven’t addressed all your questions or concerns.  However, you need to know that the State School Board sets Standards in consultation with the specialists in the fields at the school, college and work levels.  We had those voices examine the Common Core before the adoption and some changes were made per the requests of specialist in the field at our state level.

The one thing that always rings clear to me is that my first year as a high school principal, I had 300 –  9th graders – who were coming to our 10-12 high school that had had no Algebra or Pre-algebra.  We did not offer those classes, but only offered Algebra II, Trig, etc.  We had to establish a remedial math class for these students and the drop out rate that resulted from these students being so far behind in Math was so frustrating.  We established and continued the remedial classes in the 10-12 High School, but students give up if they think they can’t do the work effectively — thus the district developed an Alternative High School and has a low graduation rate as measured by many other districts.

Finally, I just want students to be successful — in our schools, but especially as they seek to attend colleges and find fulfilling careers for their life.  My great hope is that we can do our very best to allow our students to compete with any student anywhere and be successful.

I believe Ms. Allen is sincere in her desire to help, but she is misguided and without the needed expertise. Like the other Nancy-Pelosi-we-have-to-pass-the-bill-to-find-out-what’s-in-it bureaucrats, she’s willing to go along with the latest fad (and money game) at the expense of our children. She is one of many state “leaders” implementing sweeping change without understanding either the process or the impact.