The Best (and Mostly Free) Homeschool Kindergarten Curriculum Ever Created

As the implications of Common Core are felt more and more by students/parents/families, I am asked more often than ever, “How do I start homeschooling?” One of the single most common questions I have encountered is, “What is the best curriculum for kindergarten?” 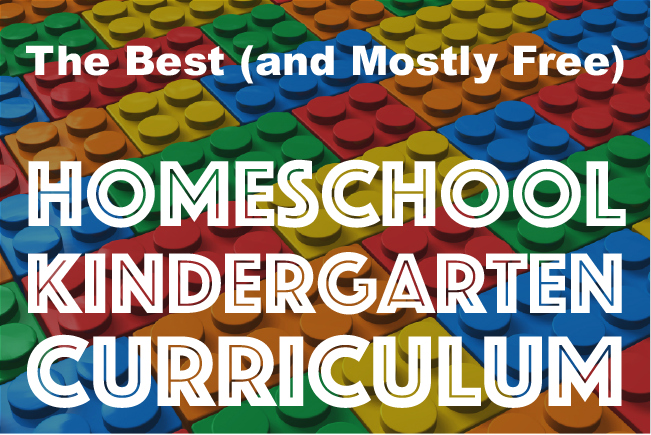 I don’t know why I’m so taken aback by this question. I could have asked it myself 20 years ago. But now when I hear it I have a strong desire to slug a tree. What are we thinking?

Perhaps the thinking comes from dolts like Rob Saxton and Jada Rupley who think there can actually be “sobering” results from kindergarten readiness tests based on, say, the number of letters or numbers a year-year-old knows. Or maybe from dolts like Barrack Obama who are sure putting kids in pre-school (and probably pre-pre-school and…) is the solution for all the “sobering” problems of non-academic tykehood.

Kindergarten children are five years old. We all know this, right? Outside of abusive or neglectful parenting (which neither this study nor the president was addressing) why are we being angst-filled about the academics of five-year-olds?

Just to give you a sampling, even among our six children we have a large range with regard to reading proficiency.

I have one who taught himself all the letters (he slept with his sister’s alphabet puzzle — I swear) when he was two, could spell many words (again, self-taught) by two-and-a-half, and could read simple words (self-taught) by three. He was cognizant enough that before he was three he could make jokes about spelling things incorrectly.

Trust me, I would never take it upon myself to even try to teach a child this young to read. Also trust me that I used to think people who made such claims were making it up. I know how it sounds. I was as surprised as anyone.

Middle of the Bell Curve

I have four who learned to read between the ages of four and six in a pretty typical fashion using phonics. (I do not actually know if this is the average national reading age (and I really don’t care, but feel free to provide stats in the comments!), but it’s in the middle of our family bell curve.)

I have one who could read at five, but really hated it. Hate. Hate. Boring. For example, when we’d try to read some short “a” words, she would rather to do anything other than read the list. This is how it looked:

Mom, is that a bat like you use at a baseball game or a bat like the one that hangs upside down in a cave? Remember when we saw all those bats at the science museum in that big place upstairs and the were soooooooooo creeeeeeeeepy? I loooooove bats, but they are kind of scary and I’m afraid they will bite me. Will I turn in to a vampire if they bite me? It would be cool to be a vampire, but not to have to sleep in a coffin. That would be scary! What if…

So, I would work with her on reading and after about four minutes I’d give up and let her go “build Thunder Mountain” in the garage. Or make her “hat factory” with office scraps. Or make horse or monkey or dinosaur costumes for all her siblings. A few months later I’d try again and give up. Rinse. Repeat.

When she was seven-and-a-half years old she came in from the garage and announced, “Mom, I can’t build the stuff I want to unless I can read the directions.” Within less than a month she was reading at a junior high level. Because she was internally motivated.

They need a healthy, loving environment with exposure to a variety of good things. Period.

The Best Kindergarten Curriculum Ever Created

Without further ado, I present to you the amazing (and mostly free!) things that will best provide every kindergarten child on earth with the necessary preparation for further schooling and eventual responsible adulthood. These are in no particular order.

What would you add to the list of kindergarten activities?